Sweet Spot training for cycling – what is it and why do we do it?

Today’s file analysis has a ‘busy image alert’ warning. There is a fair bit going on in this compiled image. It is best viewed on a desktop, expanded.
Sweet spot is a term that is widely used in cycle and triathlon programming. But what is it and why do we do it? It’s largely a term that has evolved from some of the pioneering work with power meters. Essentially it is a way to describe a training zone that falls somewhere between tempo (Z3) and threshold (Z4). Most coaches and scientists peg it at 88-94% of FTP. So it is not actually a zone per se, but heck that is another discussion altogether.
Many coaches and scientists like it as a ‘good bang for your buck’ session. Often thought of as ‘comfortably uncomfortable’. In other words, there is not a lot that is sweet about it.
I like to program it for triathletes (70.3 athletes spend a lot of time here), time triallists at the beginning of a FTP block, and roadies at certain times of the season.
You can program sweet spot as ‘continuous’ (for example 3 x 15 min efforts) or ‘freestyle’ where it is worked into a bunch or solo ride.
This file analysis is for a long course triathlete who has an event coming up that is dead flat. I mean seriously dead flat. This means said athlete needs to work on continuous pressure on the pedal stroke. Hence the session of 3 x 15 minutes. The file notes advised the athlete to choose a relatively flat course and aim for a cadence of 80+.
The first image is power only – nailed it!
The second image is power and heart rate – the drift upwards in heart rate is normal and expected because of the lag in heart rate. This is why so called ‘cardiac drift’ ALWAYS needs to be interpreted.
The third image is cadence – I like the first interval as the cadence is nice and steady and there are no breaks in pressure on pedal stroke.
I’ve also included the summary data for the three intervals so you can see the power is spot on with regard to Intensity Factor. If I were being persnickety I would say the cadence on the third effort was a smidge low.
But overall a really good session for this athlete.
Oh – and PS, sweet spot is exactly the sort of training that any polarised programs exclude. But again, that is another discussion.
And yes, first image shows said athlete included a perfectly executed coffee at the end of the ride before rolling home. 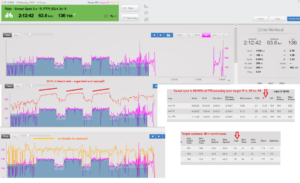