Pinning a number on at the local club crit

Club crit at our course on the Northside this week, near Noosa. Track is Girraween, and has a lovely pinchy hill in it. My kind of track. Legs were well done from yesterday’s 130km and 1500m; but this is when you dig deep and racing on tired legs can bring breakthroughs. So I decided it was going to be a training day again, as it is a 40km ride each way to the track. In my head as I was riding out there I decided that I wanted to be really aggressive today. I didn’t care where I came, I was just going to attack the race as much as I could. I wanted to try and be a part of the race instead of a passenger. I know I can’t leave it to the sprint, I have to try and kill legs before that

We were 30mins+2 laps. I just went for it from the start. Every time I went up that hill I tried to be the first up it and then see if anyone would come with me to get away. Time and again I got shut down on the descent by the group; but I kept trying. Eventually two got off the front and I was just behind them. I tried to bridge but I couldn’t and no-one would help me. One of them died after a couple of laps away, but I just couldn’t get the other one. One of the guys I ride with bridged across to me to give me a little breather. With 2 laps to go it pissed down and my mate told me to go for it and he would roll back and control the bunch. I nearly overcooked the descent on the penultimate lap in the wet and just avoided the grass. Held it together and could actually cruise across the line.

Much fun and goal achieved. Used it as a workout and saw some nice HR numbers. Power was never going to be impressive given the up/down nature of the course.

I can’t understand the mentality of doing no work and trying to win a club race. It means nothing in the scheme of things. It’s different if a championship event, totally get that. But there you go; that’s me. PS – I do a good pain face 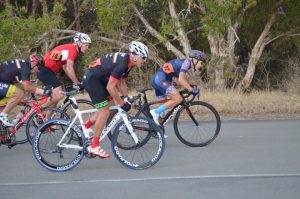 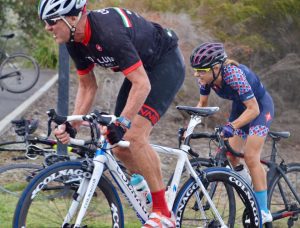