This past weekend the state time trial championships were held in Queensland. I thought it would be interesting to look at 5 rider files from the event, compare them, plus talk a little about the training the athletes did in preparation for the event.

Firstly, some context is needed with regard to the event and training. The state championships were the 3rd race in a series of time trials over 3 weeks. That is, a race a week for 3 weeks. Therefore the week between races on both occasions was all about recovery, turnaround, and a short preparation in order to race again. All 3 races were around the same distance, 20km. Race 1 and 2 were modestly lumpy, with around 100m of elevation in the 20km. Race 3 was considerably ‘lumpier’ with 150m of elevation.

Here is the profile:

What sort of training did the riders do leading into the race?

I’m summarising here, as the riders were not on exactly the same program. Predominantly they came into the pre-preparation phase off an FTP boosting training block which looked something like this. One session of long intervals (something like 2 x 20), one session of maximal aerobic intervals (5 x 4 minutes), one long endurance ride on the weekend with plenty of hills; plus the balance of rides as shown. In total, around 12 hours or 700 TSS of training.

What did the week between time trials looks like?

A week is quite a quick turnaround. This was even shorter between race 1 and 2; as race 2 was on the Saturday. Here’s what a week looked like. A session of solid FTP intervals, and then some sharpening up with shorter harder efforts. You’ll note the day off is not the day before, rather it is 2 days before. I favour this approach with most riders and I find the day before it works better to ride, including some activations.

I should point out that 4 of the 5 athletes trained specifically for this ITT series. Their preparation was individualised and the ITT specificity in training commenced back in June. The FTP that they were training to was specific to their TT bike. This bit is important. It is one thing to be able to produce power, it is another thing entirely to be able to do this in the TT position and be aerodynamic. There may be a trade off in this. That is, a particular position may be more aerodynamic, but if you are unable to produce the same power in this position you might be better off changing to a less aero position on the bike. All 4 of the TT specific athletes moved their FTP on the TT bike higher across the training block leading into the series. That is, their TT FTP was below their roadie FTP to start with. At the end of the training block it was much closer to, and in some cases better than their FTP on their road bike.

I don’t want to digress off into that area, as that’s for another blog. I did want to make the point though, that there was one rider who did the race who did not specifically prepare for it. And that was me. I did the race because it was here on the Sunshine coast and I was going to be there anyway to support the athletes I coach. I did not do one specific TT session of FTP intervals. I do not recommend this training approach. Be prepared to hurt a lot, because it did. I think my face in this picture shows what I was anticipating. 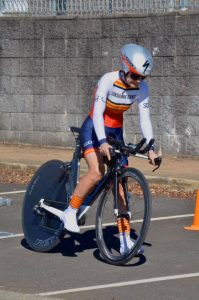 What are some of the interesting numbers for the 5 athletes?

RESULTS: by category – 3 first places, one third, and one tenth

Intensity Factor (where 1.0 is equivalent to the race being done at FTP): these were 1.0, 1.02, 1.03 and 1.05. The only rider who was not able to do the event at the equivalent of FTP or above was, no surprises here – ME. I was 0.95. This is because my FTP was set to my road bike not my time trial bike. I have never been able to generate as much power on my TT bike as I can on my roadie. I did not do a FTP test on my TT bike to set it either. The other 4 riders did, and then their training was set to this. Hence they were able to produce the numbers. Specificity counts for a lot. Here’s my power profile. You can see just how variable it was, which leads me to my next point.

Because it was a lumpy course one of the interesting things to look at is the Variability Index (VI), or the difference between raw power and normalised power. This is effectively a way of looking at how hard the riders punched up the hills, and how well they rode the downhill sections. A lower VI would indicate that the rider had a smoother intensity across the ups and downs. The picture below shows you a comparison between two riders, one with lower variability at the top. Interesting how different it can look, yes? This is where the coach needs to sit down with the athlete and look at this information, in combination with what is going on with heart rate, in order to give feedback. Every athlete’s physiology is different. Some athletes might be able to buffer those big power spikes well above FTP, others may not. There is no one formula.

Firstly a qualifier – this is only a sample of 5 so it’s on the low side to do any meaningful statistics on. But I can tell you that the best predictor of performance was W/kg. It accounted for 61% of the variance in performance. So that means there is 39% there that is accounted for by other things. No doubt aerodynamics is one of these.

W/kg was a better predictor of performance than actual power. I suspect this was the case because it was a lumpy course. If it were a flat course I would expect that absolute power would be a better predictor.

But here is one of the interesting things. Even though W/kg was the best predictor, a rider with a power output of 3.7W/kg was faster on the course by around 30 seconds than a rider with a power output of 3.9 W/kg. The comparable absolute power numbers were 251W compared to 191W. That is, Athlete A at 251W for the race (3.7W/kg) was 32 seconds faster than Athlete B at 191W (3.9W/kg). So on a lumpy course such as this it comes down to the interplay of a number of factors – absolute power, W/kg and aerodynamics. In fact all TTs will pretty much come down to this, it’s just interesting to look at how it played out in this event.

And could someone please tell this rider to get a bike fit/work on core/both of the above, in order to flatten that back a bit! 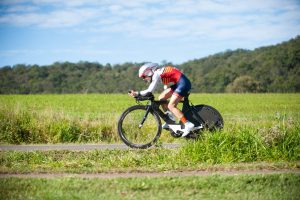